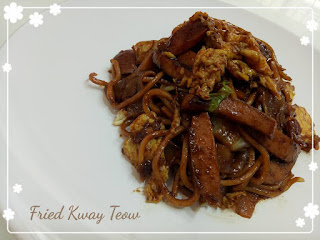 My maid cooked this Char Kway Teow for lunch and I thought I should post this as one of my cooking recipe for future reference. The main ingredients : Kway Teow, yellow noodle, fish cakes, chinese sausages and eggs. As for seasoning, my maid used her own discretion : sweet sauce, pepper, Knorr seasoning powder.

For better understanding the origin of this dish, please find as below:

Char Kway Teow, literally "stir-fried ricecake strips", is a popular noodle dish in Malaysia, Singapore, Brunei and Indonesia. The dish is considered a national favourite in Malaysia and Singapore.

It is made from flat rice noodles (河粉 hé fěn in Chinese) or kway teow (粿条 guǒ tiáo in Chinese) of approximately 1 cm or (in the north of Malaysia) about 0.5 cm in width, stir-fried over very high heat with light and dark soy sauce, chilli, a small quantity of belachan, whole prawns, deshelled blood cockles, bean sprouts and chopped Chinese chives. The dish is commonly stir-fried with egg, slices of Chinese sausage, fishcake, beansprouts, and less commonly with other ingredients.[2]Char kway teow is traditionally stir-fried in pork fat, with crisp croutons of pork lard. In Penang, Char kway teow is commonly served on a piece of banana leaf on a plate, so as to enhance the aroma on the noodles.[3]

Char kway teow has a reputation of being unhealthy due to its high saturated fat content. However, when the dish was first invented, it was mainly served to labourers. The high fat content and low cost of the dish made it attractive to these people as it was a cheap source of energy and nutrients. When the dish was first served, it was often sold by fishermen, farmers and cockle-gatherers who doubled as char kway teow hawkers in the evening to supplement their income.
Posted by BeautyMe at 12:00 PM

Email ThisBlogThis!Share to TwitterShare to FacebookShare to Pinterest
Labels: Noodle

Be my friends here!